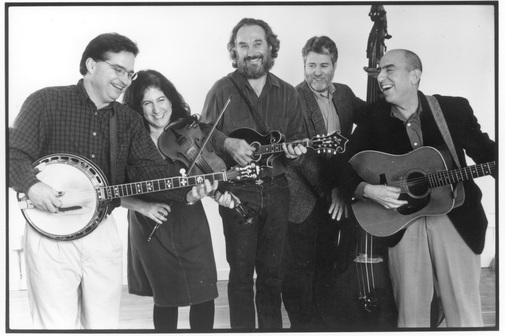 "Bill Monroe meets Memphis Minnie at the Cajun fais-do-do, and together they buckdance their way into the 21st century!"

Innovative traditionalists Bill Evans (banjo, vocals), Suzy Thompson (fiddle, Cajun accordion, vocals), Eric Thompson (mandolin, guitar, vocals), Larry Cohea (bass and vocals), and Alan Senauke (guitar, vocals) are among California's most highly respected musicians, working alongside artists like David Grisman, Peter Rowan, Laurie Lewis, and Maria Muldaur. Whether re-working material from a Library of Congress field recording, adapting a Cajun two-step, reinventing a Flatt & Scruggs or Jimmy Martin classic, or playing their original tunes, the genre-bending Intentions combine a lifetime of blues and rhythm, impeccable musicianship, and superb harmonies, all around one central microphone.
"Bluegrass is a living, vibrant part of the folk tradition. It continues to be created and re-created by the cultures of the South that invented it. It is rare to hear a band from outside the South play and sing this music so convincingly. The Bluegrass Intentions haven't learned bluegrass music, they know it."

"Forget everything you think you know about Northern California bluegrass bands. This one owes none of its sound to either Stephane Grappelli or the Grateful Dead; if the band's debut album is any indication, it rarely performs songs written later than 1950 (except for banjo player Bill Evans' own "Petersburg Gal", a banjo showcase which could have been written in 1950). This is high-energy, old-school bluegrass that will please the most hardline traditionalist. The Bluegrass Intentions balance ebullience with virtuosity, and the result is one of the most satisfying bluegrass albums of recent years. Highly recommended."
Internet All-Music Guide

"What a mesmerizing blend of the old and the new! Ancient primeval tones played with a modern precision; tough, gritty vocals; sparkling instrumentation creativity and a bouncing, buoyant groove that just doesn't quit. It's a CD that simultaneously looks both to the future and that primordial bluegrassical ooze and comes up with something fresh, exciting and new in the process. This is a powerful CD that I'm going to be playing incessantly here in Nashville."
Dave Briggs, WPLN-FM, Nashville, Tennessee

What would happen if you took a strange melody from a 1934 field recording made by Alan Lomax in Crowley, Louisiana, added lyrics from the oldtime fiddle guru Tommy Jarrell, and played the resulting combination bluegrass-style?? The Bluegrass Intentions! Bill Evans on banjo, Alan Senauke on guitar, Eric Thompson on mandolin, Suzy Thompson on fiddle, and Larry Cohea on bass have joined forces to play energetic classic bluegrass, drawing not only from the legends of bluegrass (like Bill Monroe, the Stanley Brothers, Don Reno, the Osborne Brothers, etc.) but from musical heroes from other Southern genres: oldtime fiddlers like Marcus Martin and Benton Flippen, bluesman Leadbelly, pre-bluegrass hillbilly bands like Buster Carter & Preston Young, and country-western singers Rose Maddox, Buck Owens, and George Jones...the Bluegrass Intentions interpret this material in a way that is fresh yet totally consistent with the classic bluegrass sound.