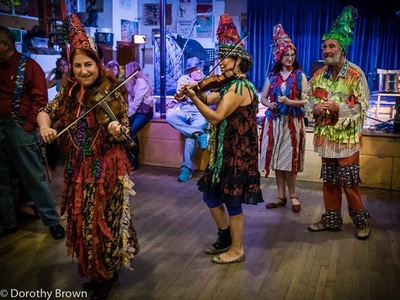 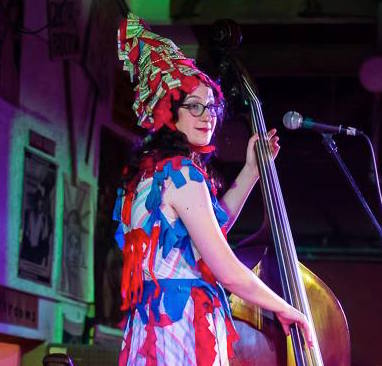 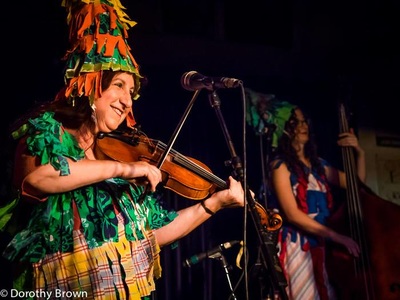 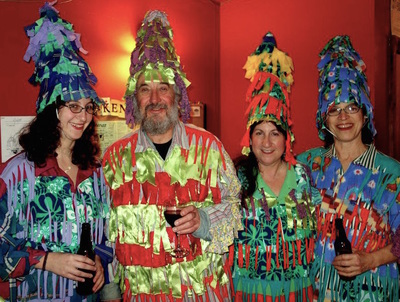 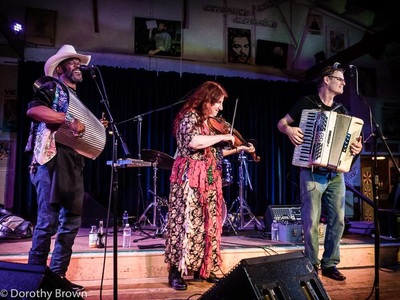 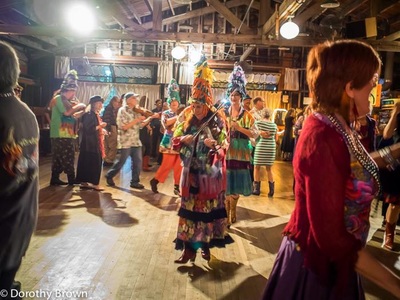 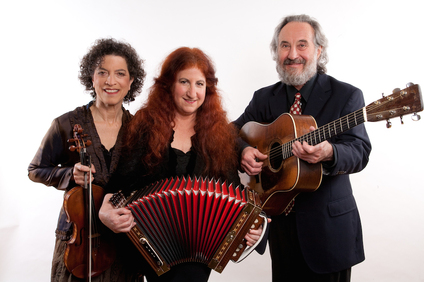 photo by Lori Eanes
Equally at home in a dance club, concert hall, or house party, the Aux Cajunals play the kind of old-fashioned Cajun music which has been an integral part of celebrations in southwest Louisiana for over 100 years. The Aux Cajunals' sound is hard-driving but not ear-splitting, inspiring listeners to dance the twostep or waltz, or just to soak up the rich textures of the acoustic instruments and the emotion-drenched French vocals. The Aux Cajunals Big Band, which includes Karen Heil on fiddle and John Hanes on drums, adds zydeco and vintage rhythm and blues to the mix, including material from such great roots artists as Big Joe Williams, Memphis Minnie and Freddie King. Suzy Thompson squeezes her Louisiana-made one-row accordions, fiddles up a storm, and brings the Cajun and Creole songs to life with her powerful vocals. Eric Thompson's acoustic rhythm guitar chops keep the dancers up and hopping, and in the big band, his lead guitar playing gives a bluesy edge to the zydeco and R&B numbers. Agi Ban plays lead fiddle while Suzy plays accordion and her fiddle duets with Suzy are truly show-stoppers.  Allegra Thompson​ (daughter of Eric and Suzy) adds her strong lead singing and solid upright bass playing to anchor the sound of the band.

The Aux Cajunals' repertoire is designed for partying and dancing -- it's the original old-time dancehall music of southwest Louisiana! In addition to all of the Cajun standards, the Aux Cajunals repertoire includes many unusual songs and tunes learned from rare 78's, field recordings, and directly from master musicians: heart-breaking waltzes like "La Bague Qui Brillent", twosteps from the 1920's like "Waxia Special", and proto-Zydeco songs like "Blues A Voyage". Using two fiddles, they resurrect reels and onesteps from the 19th century, learned first-hand from legendary fiddler Dennis McGee. In a concert setting, the Aux Cajunals also perform unaccompanied ballads, some of which go all the way back to 17th century France!

Eric, Suzy and Agi have performed and recorded with many of the most respected names in Cajun and zydeco music, including Michael Doucet and Beausoleil, Marc & Ann Savoy, and Queen Ida. In the early 1980s, Suzy apprenticed with master fiddler Dewey Balfa in Louisiana (under an NEA Fellowship) and was also mentored by Cheese Read and Dennis McGee.  Later, she learned to play Cajun accordion while playing her fiddle alongside the late, great Danny Poullard in the California Cajun Orchestra. In addition to working with the musicians mentioned above, Suzy has also performed and/or recorded with the Magnolia Sisters, with Joel Savoy and Jesse Lege, with Ray Abshire, with David Greeley, and many other major Cajun artists.  She appears in the film "J'Ai Etais Au Bal" (on PBS as  "French Dance Tonight")  with D.L. Menard and with Queen Ida.  Eric and Suzy spent 18 years as mainstays of the California Cajun Orchestra; the band's two CDs on the Arhoolie label both won national awards.

Here are some samples of the Aux Cajunals' music:
Here's what the East Bay Express says about the Aux Cajunals:
"Why has dancing to Cajun music skyrocketed in popularity? Eric and Suzy Thompson, two of the East Bay's most talented musicians, should know. They've enlisted a couple of acoustic music friends and formed the Aux Cajunals, playing to packed clubs throughout the Bay Area. (If you remember your high school French, you'll notice that the pronunciation of the band's name is significantly similar to the word occasional.)"